Warning: "continue" targeting switch is equivalent to "break". Did you mean to use "continue 2"? in /homepages/38/d334407717/htdocs/gatheringwp/wp-content/plugins/gravityforms/common.php on line 3496
 Anger

So here’s a story about me being a sinner.

I was working at my food service job one night. A woman comes in and asks for something I’m not allowed to make. I told her I could only make it if she paid a little more money. As I said this, I had an attitude of, You better not get me in trouble. The girl was unsatisfied with my answer and she said, “Never mind I don’t want it.” I asked her if she would like anything else. She said she didn’t want anything at all. It was obvious she was mad.

In response I became mad and mimicked her terse responses with a, “sounds great”. How dare she be mad at me for not being able to provide her with something I couldn’t? The drink would be only 30 cents more! Who does she think she is? How entitled is this woman that she believes she deserves a drink that could get me in trouble! My bosses are really nice, but the only time I’ve gotten in trouble in the past was over the recipe of this one drink.

I was so mad. My friend who was there became tense as her two friends whom were meeting each other for the first time were about to shiv each other in the kidneys. It went over really badly. I still get mad thinking about this story. I think she still hates me too. I knew I should apologize, and I offered to through our mutual friend. Yet, when she showed up I didn’t recognize her. I was working.
I pleaded with God, “Please just give me this one bye with apologizing. She was so entitled. I did nothing wrong.” His answer was, “No.”
I hate this story. I hate how it still stirs such emotion in me. I hate how it’s still unresolved. Even though the first impression was bad, I do long to be on friendly terms with this woman. I know that when I meet her to apologize she probably won’t be gracious. I’ll probably die choking on the pride I will have to swallow.

UGH RAGE! I need something to calm me down. 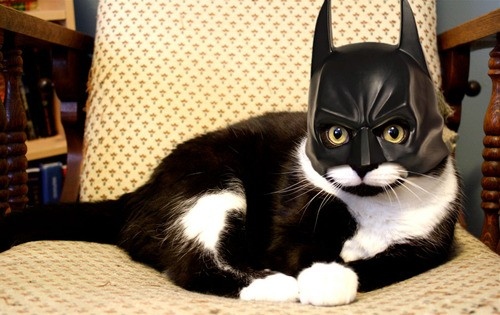 Today, I’m talking about anger. I share this story to let you know I struggle with anger too. I’ll have my rare victories, but I’ll never master it. I know the difficult conversation I’m going to have with this girl after writing this. I’m not writing this to point a finger at you. I’m equally guilty of this if not more. Yet, anger and bitterness are a form of slavery, and there is freedom and healing from it. That’s what I’m trying to share.

Earlier I said the story was about me being a sinner (one who commits sins). I don’t know where you sided on hearing my story. Maybe you thought I was in the wrong, or she was in the wrong, or both of us were in the wrong. Regardless, inside of my heart I had sinned, because it says in verse 22, “But I say to you that everyone who is angry with his brother will be liable to judgment”. Jesus equates simple anger with being responsible for murder. He equates insults like saying someone lacks sense or a brain (rhaka) with being brought before a high court. Finally, He says that saying someone is a fool (mōros) will be liable to pay the price of hell fire (Gehenna, a valley where people burned their dead animals and filth). I’ve called people worse things than just being a fool.

Now we could go into an in-depth study of these words in the Greek, but you kind of get the point without doing that. The bar for ‘okay with God’ and ‘not okay’ was previously set at murder in this situation. Instead, Jesus sets the bar way back saying that so much as being angry with someone makes you not okay with God. In essence, He says that merely having the root of the sin is enough to condemn you. As a result, it points even more so to Christ saying that we deeply need Christ to reform or sanctify us. Not simply in our actions, but primarily in our hearts.

After all, what right do I have to criticize or be angry at anyone? Have I never acted in such a way where I wasn’t justified? Have I never said something to wound or cripple someone’s soul hoping that they would still think about it 5 years from then? Have I ever not needed the grace or patience of others and my God? I have. I have been stupid. I have acted foolishly, and I have always needed the grace and patience of others and especially my God. So if people have extended such grace to me, shouldn’t I also extend it to others?

Be kind and compassionate to one another, forgiving each other, just as in Christ God forgave you. Ephesians 4:32

But Jesus flipped tables when people turned His Father’s house into a den of thieves (John 2:13-16). 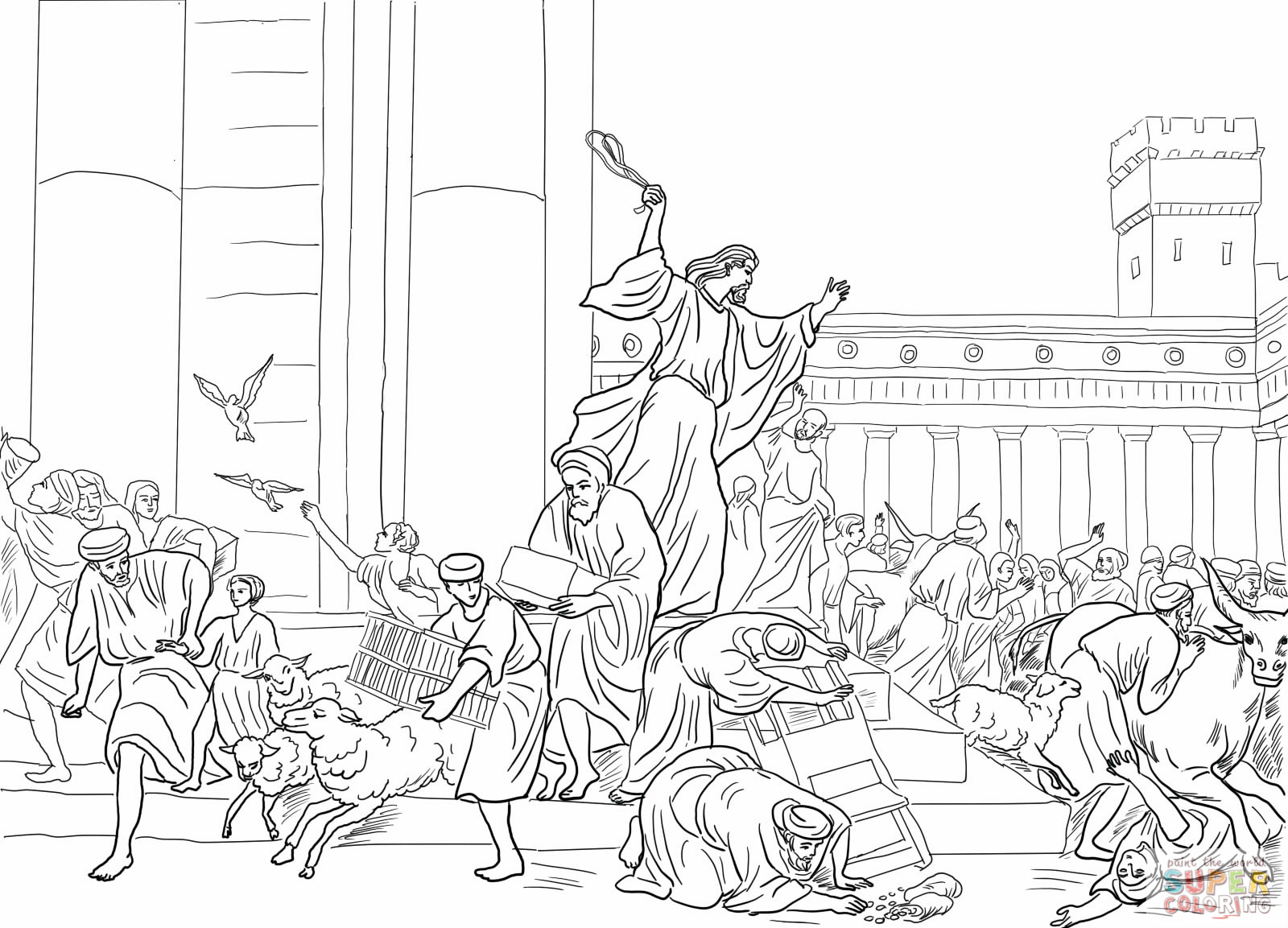 I tried to find the most violent picture of Jesus clearing the temple. Interestingly, it’s also a coloring book page. It reminds me of the movie 300. If I had more time I would have colored in some blood, and given some people eye patches. I would have loved a picture of Jesus throwing an ox at some money lenders table.

Yes, Jesus absolutely flipped over money tables, and He probably was angry doing that too. He made a whip which I assume wasn’t just for moving animals. He also called the Pharisees fools (mōros) in Matthew 23:17. All these actions seem to counter what was said in Matthew 5.
I disagree. If your friend had a loaded gun to their mouth even as a joke, would you not try to stop them? If someone you loved was in danger would you not take action? You would probably be mad doing it too. In both situations of clearing out the temple and scorning the religious leaders of the time both dealt with the stopping of people causing harm to others.

So does that mean I can be angry and take action as long as my anger is righteous?

Yes, but Biblical anger looks a lot like not being angry.

But I say to you, Love your enemies and pray for those who persecute you, Matthew 5:44

Even though Jesus ruined their business and probably got mad and maybe even beat them with a make-shift whip, He still died for these men’s souls. Had these men wanted to worship after their sin, would Jesus have not welcomed them in? He would have given them the opportunity to restore the relationship. In fact, he even ate at the house of Pharisees (Luke 7:36-49). In essence, He would have offered forgiveness. As danger and harm is actively being caused we must act to stop it, but we must still love and pray for the wrong-doers.

Yet, anger that is not dealt with or resolved turns into bitterness, all anger. Simply put, because there is no forgiveness. Anger revolves around us. We get mad when things aren’t the way we think they should be, or when we are treated the way we think we shouldn’t be treated. It’s heavily tied to justice, and as a result we demand a price to be paid for the incongruence of our expectations and reality. For the rest of this blog we are just going to focus on anger with other people.

14 Strive for peace with everyone, and for the holiness without which no one will see the Lord. 15 See to it that no one fails to obtain the grace of God; that no “root of bitterness” springs up and causes trouble… Hebrews 12:14-15

I don’t want two verses back to back so here’s a picture.

This resolution of anger and mending the relationship is so important to Jesus that even if we are in the middle or worship we are to leave what we are doing and make amends with our brother or sister. It’s even more so important that the verse doesn’t say when we are angry. It’s when someone is angry with us. That is so difficult. What’s even worse is that in order to restore friendly relations with this person (reconciliation) we may need to apologize for more than what is due. We may have to make amends for wrongs that aren’t really our faults. Now, that’s hard to believe, but did Jesus not do the same for us? Yet, if we ask and try, Jesus is more than gracious to take care of the necessities. We have to swallow our pride, but for the sake of community we must make amends.

Well, that’s all I got to say. I guess I have to make a phone call now, and maybe a free coffee drink.